Most of the claims and data in this article are based on “Small is Profitable” by Amory Lovins at the Rocky Mountain Institute.

Distributed resources have emerged not simply as spontaneous technological development but as an evolutionary reaction to the shortcomings and costs of overly centralized resources. Looking through the lens of history, large generating units first achieved and then forfeited economic advantage. Although the maximum power plant size was forecasted to reach 3GW by 1990, it peaked at 1.4GW in 1970. Contrary to the intuition that bigger is more efficient, engineers, managers and policy-makers since the early 20th century have repeatedly been reminded that technological progress, financial requirements and practical constraints have a dramatic effect on the economies of large scale.

In the 1960s, traditional utilities’ resource allocation decisions were driven largely by the discipline of power engineering, the objective of expanding generating capacity to meet projected aggregated demand and a singular focus on capital costs. Decisions were also biased by unsophisticated financial modeling (e.g. uniform discount rate) and a measure of electricity cost at exit of plant that disregarded distribution costs as unavoidable overhead.

Unlike predicted, it turned out that economies of scale ($/W) plateaued at 100MW and became trivial or negative above a few hundred MW. Once units’ electrical capacity reached 400MW in the 1960s, the efficiency of classical steam plants topped around 40%. Unfortunately, by the time power engineers and utility companies reacted to the evidence most of the giant power plants of the 1970s had already been ordered.

The unforeseen dangers of large scale

As official government and industry assessments continued to deny the reality of field data, the myths of economies of scale and learning curves remained. For example, the US Department of Energy’s 1983 Electricity Policy Project assumed the completion costs of nuclear plants to be 33% below what utilities were actually estimating. Cost per kW of coal/nuclear installed capacity grew rapidly between 1971 and 1978 due to diminishing returns in safety and cleanliness that created regulatory and political constraints which made each plant more expensive due to increasing intensity of inputs.

Utility companies also learned the hard lesson that reliability, operational flexibility, construction time and ease of siting do not improve significantly with unit size. A 1976 study by the Edison Electric Institute (shown below) found that reliability of coal and steam plants, measured as a fraction of the time they failed unexpectedly and had to be shut down for repairs, directly worsened relative to plant size. Furthermore, the cost of large power plants was dominated by costly craft labor at the site (for parts to big to pre-fabricate and move) rather than mass-production benefiting from economies of production volume. Finally, because big loans cost as much interest as smaller loans, the huge labor/capital costs and longer construction intervals of GW-range power plants created financial diseconomies of scale. As a result, cost overruns and engineering flaws in large nuclear plants led to managerial, financial and political consequences that ground construction of centralized power stations to a halt in the 1970s. 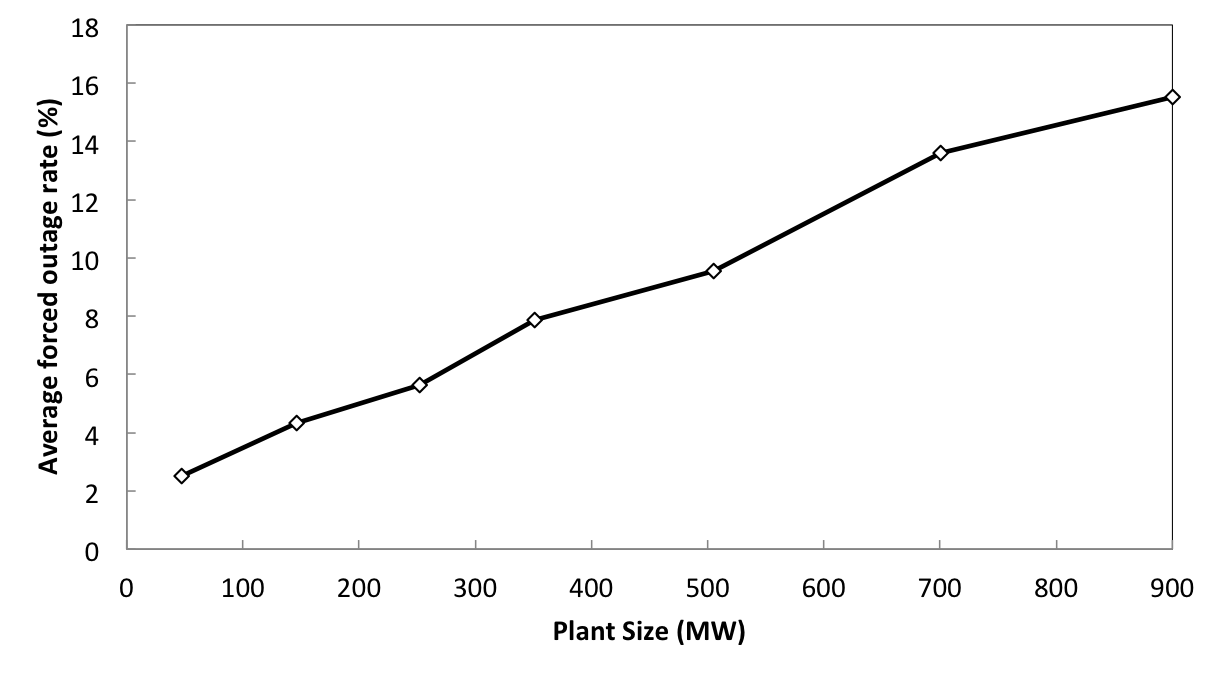 In 1980, a BusinessWeek article titled “The Utilities Are Building Small” reported an early warning sign and stated that, “The giant plant plant is fading. Small units spread risk and avoid excess capacity.” These are some of the quotes in the article:

“If you’re wrong with a big one, you’re really wrong. […] Uncertainty over demand is the main reason for the appeal of small plants and I don’t see any improvement ahead.” – Jerry Peterson, General Electric Co. (1980)

“If you’re wrong with a small one, you can just put up another; […] we have avoided the large units because they would mean too much capacity coming on stream at one time.” – Frank N. Davis, VP of Utah P&L (1980)

“When you go to very large units, you put too many eggs in one basket.” – Harvey H. Nelken, VP of Foster Wheeler Energy Corp. (1980)

Decentralization of generation assets and ownership

During the late eighties and nineties, nuclear power had zero growth and the size of new utility steam-plant generating units coming into service fell by 80% in both maximum and average terms. At the same time, US utilities effectively almost completely halted the construction of generating units less than 100MW. In 1984, the US Supreme Court upheld the Public Utility Regulatory Policies Act of 1978, which forced utilities to accept and buy back all electricity generated from non-utilities. At this time, on-site generation by non-utility independent power producers was merely 3% of total capacity, compared with 60% at the beginning of the century.

From 1990 to 2001, the total net generation of non-utility power plants owned by independent power producers grew 414%, with most new capacity consisting of gas-powered units smaller than 100MW. Growth in on-site electricity generation was further compounded by the possibility for industries and building operators to capture and use valuable waste heat as useful energy. In 2012, non-utility power from independent power producers accounted for almost 40% of aggregate electricity supply, consisting of both new generation capacity and restructuring-induced plant transfers from investor-owned utilities.

The main driver of the demise of classical steam plants in the late 20th century was the emergence of highly efficient (50%, versus 30% for steam) combined-cycle natural-gas-fired power plants. Combined-cycle gas plants could be ordered, shipped by train as packaged units, installed and commissioned within 2 years. As the availability, accessibility, sustainability and low cost of the natural gas resource became proven and the efficiency of turbines – measured as heat rate, or kWh per BTU – improved by nearly 20%, combined-cycle gas plants came to dominate the energy landscape with breathtaking adoption rates between 1999 and 2005. Other forms of small-scale generation also grew rapidly; in 2000, Caterpillar alone reported shipping over 60,000 diesel generators totaling 20GW, or nine times the capacity of the Hoover dam.

Contrary to common expectations, by the early 21st century smaller gas turbines were often more efficient than big ones. When looking at the efficiency of single-cycle turbines from 3MW to 250MW, the highest-efficiency was a 40MW unit from General Electric and many offerings smaller than 50MW compared well with 250MW turbines (see figure below). Furthermore, combined-cycle gas plants introduced new players – aircraft jet engine manufacturers such as GE – into the power plant business, whereas it became possible to standardize a design and replicate large numbers of identical units. This opened up an entirely new dimension in “economies of scale” and created a disruptive way of reducing the capital cost of generating capacity. 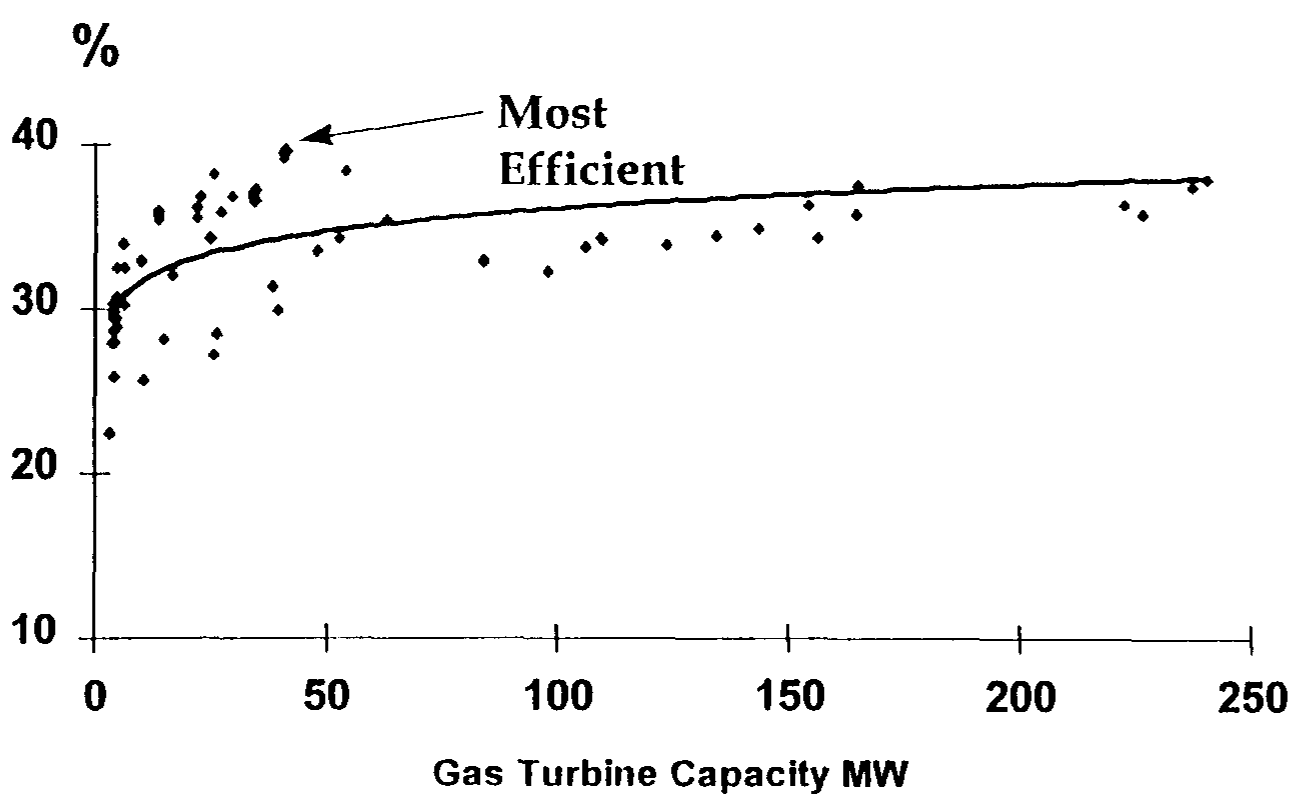 By 2013, it became increasingly evident that emerging technologies enabling smaller, more modular generation such as wind turbines, solar arrays and fuel cells were maturing much faster than anyone had expected. Whereas combined-cycle natural gas turbines had displaced more centralized assets such as coal and nuclear plants, these new modular technologies, combined with smart distributed automation and energy storage, foreshadowed more disruptions to come. As many of these technologies had the potential of being produced and installed within short time frames at rates of MW per day, utility companies found that their entire business model was at risk of obsolescence unless they found ways to either halt or leverage these developments.